RSS
← Rolling out RDA today: Keep calm and ask a librarian!
There’s a subject heading for that!?: three-dimensional printing →

A typical day for me consists solely of cataloging ebooks and occasionally a streaming video, or five in a row. Having been a cataloger for almost three years, two of those professionally, I’ve built up my editor’s eye. Wrong MARC fields and coding, misspellings, subject headings that don’t quite fit the item’s topic pop out at me when I look at a MARC record. Part of me prefers completely original cataloging but with too many good records to derive from, one simply cannot ignore the vast cooperative cataloging out there. However, that means taking good with the bad. And there are some very bad records, but many are just slightly bad. This is where errors can sneak into catalogs if the cataloger isn’t paying attention. Hence the “cataloger’s eye” that is crucial to hone and use when deriving any records.

Besides just fixing up my new record, making it accurate and complete, though those are loaded words that get defined by whoever is using them, I report errors to LC via their Error Report Form that serves for catalog and authorities error reporting.

It’s so simple to use! Type in the LCCN (LC control number), title, select if the error is in the catalog or authorities and if it is just this record or more, write the issue, and give your name and email. While the “thank you” page after your submit has a stock message of how it takes at least five days, I’ve found that most times they will correct errors within the day, if not a couple of hours. This depends what type of error you report as well as what they have going on. There are certain things, that I’ve found out, that they won’t correct.

First, though, lets cover what LC will correct. My favorite submissions are misspellings. Easy to find, especially if you mistype something, and very easy to fix. I love receiving these emails: 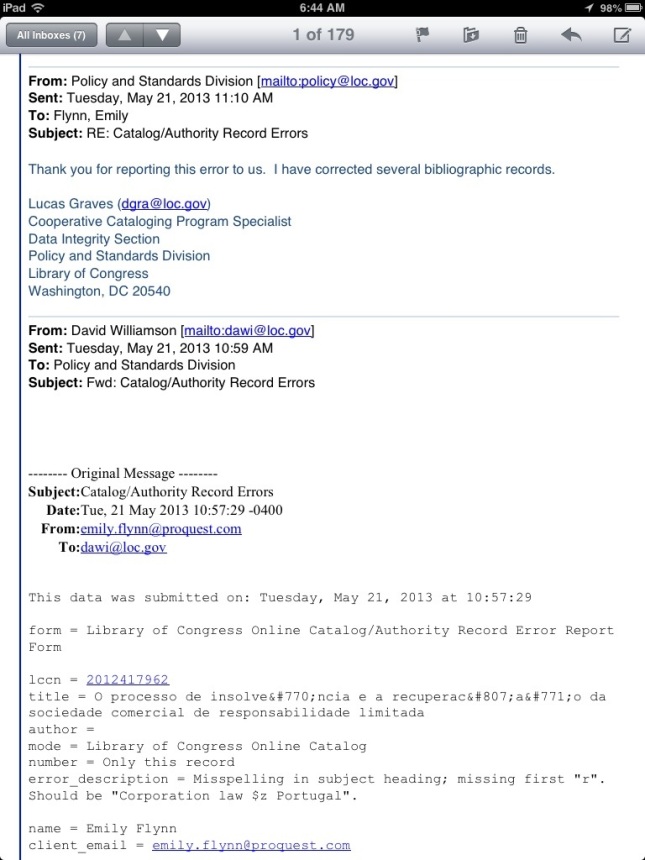 Awesome! “Coporation” became “corporation” once more. I used to do these corrections as a undergrad student in tech services at Lawrence University. For me, misspellings in the authorized versions are highest priority when I find one and I always report them. Usually the misspelled name or subject heading wasn’t controlled in OCLC and was the only one in the bunch so they jump out that way. Slightly less obvious are misspellings in titles or subtitles which are crucial to if someone will find it or not. Though sometimes they aren’t truly errors and I don’t know off hand. This record has piano misspelt but is that due to a different spelling in another language?:

Probably not so it might be worth reporting. Another type that rarely occurs but drives me nuts is the wrong MARC coding for the 245 in which the title gets clipped because it has been told to skip an article of the wrong length. The one I found last year had no article at all but had been cutting off the first four characters of the first word. LC fixes these immediately as well. So please report any and all errors of these two types to the via their easy form and you’ll hear back soon from Lucas or another on his team.

Not all errors are fixed by LC since they don’t see them as errors due to policy. Bear with me, even though that sounds odd. When the LC classification changes, they don’t redo all of the items to update their classification and call numbers to the new one. Originally I thought this sounded awful. First off, all new works still gets classed by them in the defunct area and show up in OCLC and get perpetuated even though catalogers aren’t supposed to use it anymore. That means we must check and place the items correctly in our local catalogs. But what’s the alternative for them? Re-cataloging and move thousands or hundreds of thousands of book? No. That’s too much. So then the LC classification just needs to be checked and adjusted on the local levels, which is annoying but not that much work and sometimes it’s don’t anyway to cutter it correctly locally. Bottom line, don’t worry about LC classification in their catalog and don’t report it. I’ve received that reply from them as well.

Next time you see an error, please report it to LC and make the LC online catalog a better place for us all!

Comments Off on LC Error Report Form: Find an Error, Fix it up! All Day Long You’ll Have Great Luck!

Posted by ReadWriteLib on May 22, 2013 in Uncategorized

← Rolling out RDA today: Keep calm and ask a librarian!
There’s a subject heading for that!?: three-dimensional printing →