There’s a subject heading for that!?: hurricanes

Of course there is a subject heading for “hurricanes”–just stick with me. For the past few days, especially yesterday and today, Hurricane Sandy is the topic of the media and many people’s conversations. It has surpassed the 2012 presidential election, for the time being, and that’s under a week off. In Michigan, we are seeing some of the effects as it is cold and very windy, though nothing compared to New York, New Jersey, and other states. Some Michiganders had snow this morning but only sleet was on my windshield and the rain here has been off and on. Hurricane Sandy, a.k.a. superstorm or frankenstorm, lost some of her gusto when she hits the Canadian cold front so now she is a post-tropical cyclone or, more colloquially, a nor’easter. However, before her name change, I looked up “hurricanes” on LC Online Catalog, since even though LC is closed, their website is still up!

Did you know that named hurricanes have their own subject headings? I don’t catalog works on hurricanes, so this was news to me. It makes perfect sense. 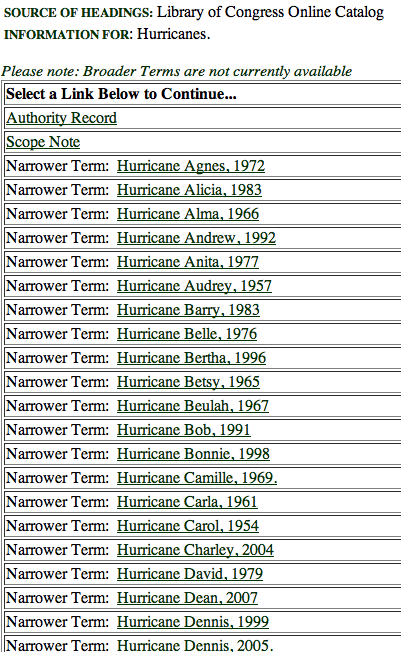 And the list goes on! This is only part was through the Ds, so check out the LC Authorities File Online to see the rest. Besides getting a scope of how many hurricanes are written about individually, the notes in the “hurricanes” authority record are priceless and fascinating–take a look below. 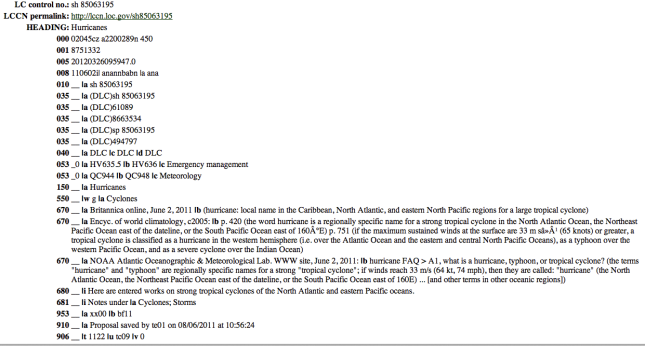 And a closer screenshot of the notes that describe hurricanes. Enough to be helpful in knowing what storms are termed hurricanes.

Sandy will likely get a narrower term under hurricanes as well, since she’s been, unfortunately, a massive and in some cases record-setting storm. Not to mention the fact that she way-laid the final week of political campaigns for Romney and Obama. However, her authority file will likely have a scope note that explains her changes in nomenclature, as well as references to her other names. Frankenstorm was the best, by far, considering her timing. This past Saturday at a Halloween party, one guest showed up in jeans and a tee wearing a name tag that read “Frank N. Storm”.

The single most interesting, for me, was Hurricane Katrina, 2005–Comic books, strips, etc. This is cataloging lingo for graphic novels, lately anyway.

Graphic novels rooted in history can be amazing and present a different type of entry point into those events. Persepolis, and Maus are two of my favorite books, and I am not a reader of graphic novels. They both were assigned readings in college. So that makes me want to look up these two, particularly since I lived during the time of Hurricane Katrina. Perhaps they will make to it my bookshelf and onto my other blog as reviews.

For now, stay warm and safe, no matter where you live. And keep everyone affected by Sandy in your thoughts!

Posted by ReadWriteLib on October 30, 2012 in Uncategorized